ATHLETES DEMAND A LOT OF THEIR BODIES.

And they’re not the only ones! Canes Deer Velvet assists your body to meet the demands of a physically active lifestyle.

Awareness of Canes Deer Velvet is already high among New Zealand athletes, with professional sportsmen such as Sam Cane and Liam Messam making it a regular part of their nutritional intake.

The benefits for circulation, healing and joint health are significant for anyone who is active in sport or other physical activity. And a strong immune system is highly important to someone who continually puts their body under immense stress, and has invested huge time and energy into preparing for their specialist sporting event.

Researchers have shown Deer Velvet promotes peripheral circulation. This results in efficient delivery of nutrients and oxygen around the muscles, and effective removal of the waste products produced with exercise (eg lactic acid build up) Good circulation and oxygen to the brain helps the body to deal with fatigue and stress associated with intense exercise.

The anti-inflammatory prostaglandins assist the body to regulate inflammation and swelling in the joints and muscles, and therefore pain. Helpful also in reducing recovery times after physical workouts and minimising the effects of sports injuries.

How and why it works

Discover the BENEFITS and the NUTRIENTS found naturally in Canes Deer Velvet, and their effects in relation to sports performance and recovery.

Research* Results are Remarkable! – Clinical trials have proven that velvet may increase athletic performance and lower risk of heart disease.

In 2004, 10 experts from 5 US universities and 2 research institutes investigated the physiological performance enhancing effects of New Zealand deer antler.

32 male weight training enthusiasts that had at least 4 years experience were chosen and randomly assigned using a double-blind placebo trial design. The placebo group received sugar capsules and the velvet group received 1350mg of deer velvet twice per day, a total of 2700mgs.

Prior to and immediately following a 10-week period of velvet supplementation, each subject participated in a series of measurements including the measurement of maximal aerobic capacity, maximal power output on a cycle ergo meter, maximal strength for the bench press and squat, and a comprehensive blood chemistry profile.

At the start of the study, there were no significant differences between the groups in their respective body composition profile variables.

At the end of the study, the velvet group showed the following remarkable changes:

Deer velvet capsules at the recommend dose are considered safe for use by athletes undergoing drug testing. Canes Deer Velvet has been batch tested for WADA banned substances.

Concentrated extracts of IGF for sub lingual use, (some of which may be sourced from Deer Velvet), are a completely different product and their use may affect drug test results. 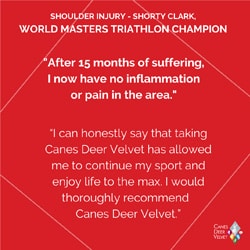 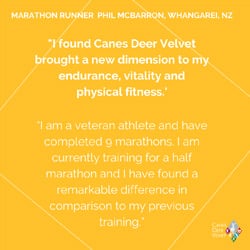